Guy Ritchie’s new £ 125 million film Operation Fortune – with a cast headed by British stars Hugh Grant and Jason Statham – was pulled from release because it featured a group of Ukrainian gangsters.

The spy action thriller, which was filmed in 2020, was set to come out this spring but disappeared from schedules. I’m told that the nationality of the gangsters has now been edited out.

A trailer, which can still be seen on YouTube, shows Statham, as spy-for-hire Orson Fortune, realizing that a deadly weapon has been bought by a Ukrainian crime syndicate.

The spy action thriller, which was filmed in 2020, was set to come out this spring but disappeared from schedules

His sidekick, played by actress Aubrey Plaza, quips: ‘I hope you take them to dinner first. . . ‘

Sources close to the film say that out of sensitivity to the ongoing war it was decided that they needed to lose the ‘detail’ of the nationality of the gang.

They point out that the caper was always intended to be fictional entertainment, and not a political statement; and that the project was simply overtaken by events. One added: ‘To be clear, there are many bad guys in the film. . . the antagonists come from all over the world. But out of sensitivity to the ongoing war in Ukraine it was decided some of these should no longer be identified as Ukrainian. ‘

The picture will now get a global cinematic release at some point later in the year.

Ritchie’s film was certainly the victim of bad timing. A publicity campaign was ready and waiting to be launched; trailers were released; and posters printed in December last year.

However as Russian troops started to mass on the border with Ukraine, the original release date (in January 2022) was pushed back to March. And on February 24, when Putin’s tanks rolled into Ukraine, that later date was also pulled, without explanation, by distributors STX. 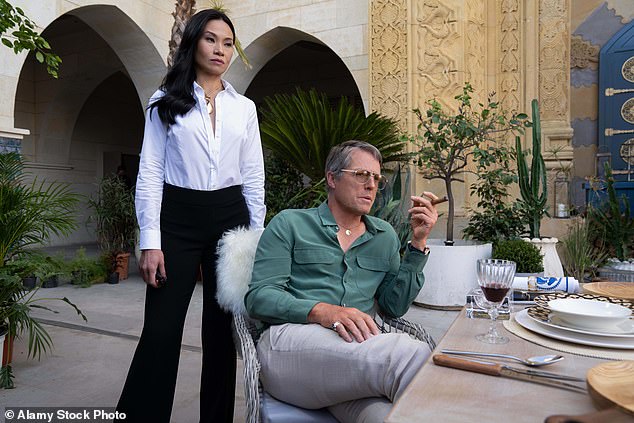 A trailer, which can still be seen on YouTube, shows Statham, as spy-for-hire Orson Fortune, realizing that a deadly weapon has been bought by a Ukrainian crime syndicate

The plot of the film, which has the full title Operation Fortune: Ruse de Guerre, concerns billionaire arms broker Greg Simmonds. He is played by Hugh Grant, very much against type, as a perma-tanned, cigar-chomping Cockney geezer. Jason Statham is our hero, Orson Fortune, who is trying to stop Simmonds from selling a secret weapon.

The comedy mostly arises from Fortune’s brainwave to try to get to Simmonds by introducing him to his movie star idol Danny Francesco, played by Josh Hartnett. Eddie Marsan and Cary Elwes also appear.

Since filming Operation Fortune, Ritchie has directed Jake Gyllenhaal in The Interpreter, about efforts to extract a military interpreter from Afghanistan. He is also working on a TV version of his 2019 movie, The Gentlemen, about a marijuana kingpin.

And it has just been announced that he will direct a live action remake of Disney film Hercules. He previously directed the remake of Aladdin, with Will Smith as the genie.

Tom Felton – Draco Malfoy in the Harry Potter films – is having a bumper year for business. This week he was plugging a new attraction at the Warner Bros Studio tour: Professor Sprout’s Greenhouse.

He has also written a ‘coming of age memoir’ titled Beyond The Wand, out this fall and expected to be a big money-spinner. The book – the first by any of the ‘Potter kids’ – will tell the story of his experiences on the Potter set and include his account of the close friendships he formed with actress Emma Watson and other cast members. 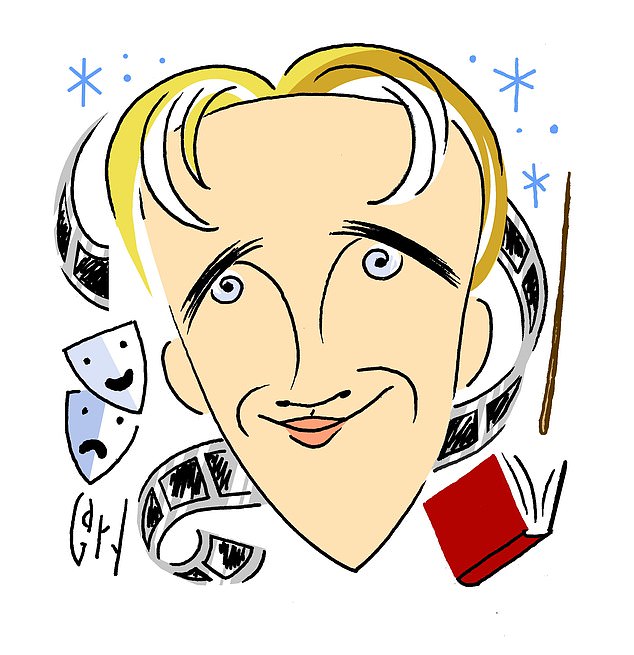 The actor, who lives in London with his dog Willow, flogs T-shirts and music via Instagram to his fans. Oh, and he recently invested in a vegetarian company which makes the vegan pepperoni used by Papa Johns and Pizza Express.

Is Benoit Blanc, the Southern gentleman detective played by Daniel Craig in Knives Out, a Beatles fan?

I ask because Netflix has just revealed the very teasing title of the sequel to Knives Out – Glass Onion: A Knives Out Mystery. Glass Onion is the title of a track on The Beatles’ White album and was written to deliberately intrigue and annoy those who sought to find hidden meanings in the band’s lyrics. Paul McCartney once said: ‘Little legends grew up about every item of so-called significance, so on this occasion we decided to plant one.’ 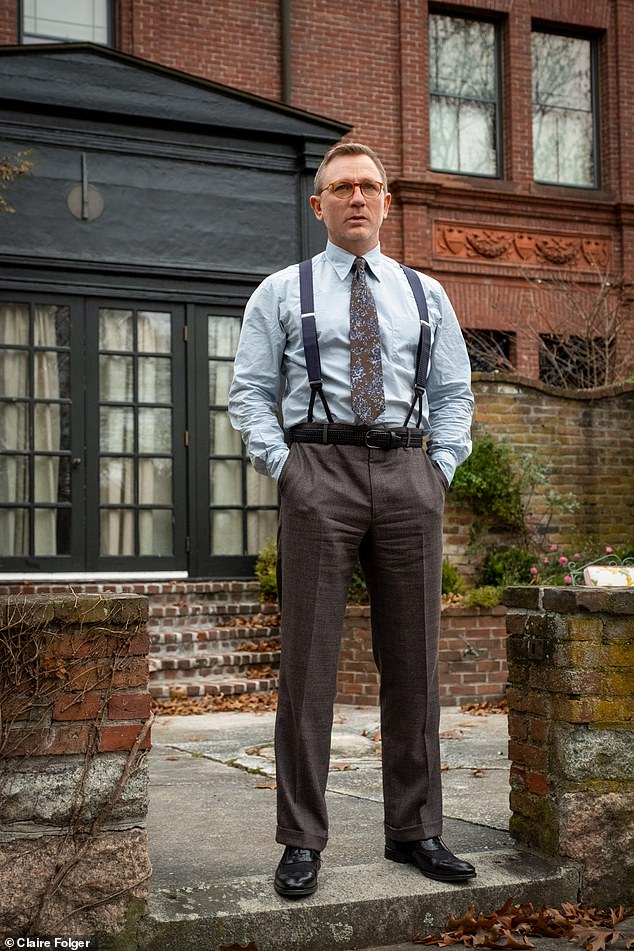 Is Benoit Blanc, the Southern gentleman detective played by Daniel Craig in Knives Out, a Beatles fan?

Meanwhile, director Rian Johnson has been tweeting about his love of Agatha Christie. The new film is set on a boat, like Christie’s Death On The Nile. In addition to Craig, the cast includes Kate Hudson, Edward Norton, Ethan Hawke and Dave Bautista.

The Staircase started out as a successful documentary before being transformed into a super-prestige streaming drama starring Colin Firth and Toni Collette.

And it seems that a similar journey awaits another of lockdown’s great hits: The Tinder Swindler. That two-hour documentary – about fraudster Shimon Hayut (above) and the women he conned – is now being turned into a feature film by British Hollywood executive Stuart Ford, of leading independent AGC Studios. Big names are circling the project. 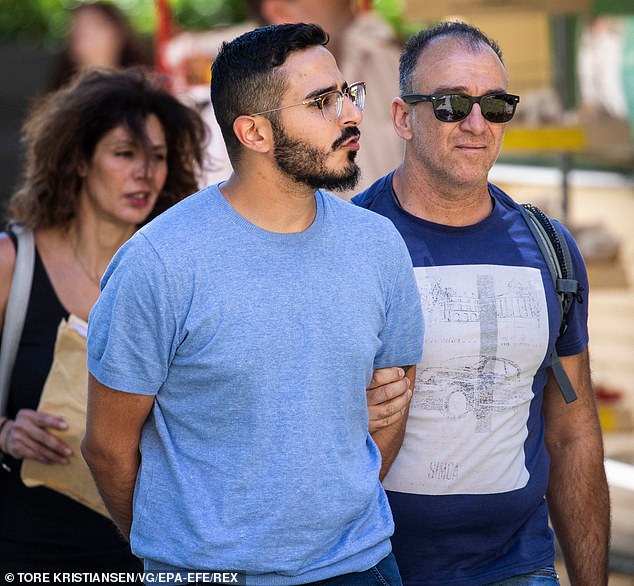 Simon Pegg is so low-maintenance that he bought his own props for Channel 4’s much-anticipated new drama The Undeclared War – miniature rugby balls, which his character squeezes when under stress.

Pegg said: ‘I got them from Amazon, didn’t charge the production, and I’ve since given them to my dogs, Willow, Cookie and Myrtle, to chew on.’ The actor plays Danny Patrick, Head of Operations at GCHQ, in Peter Kosminsky’s six-part cyber-thriller. 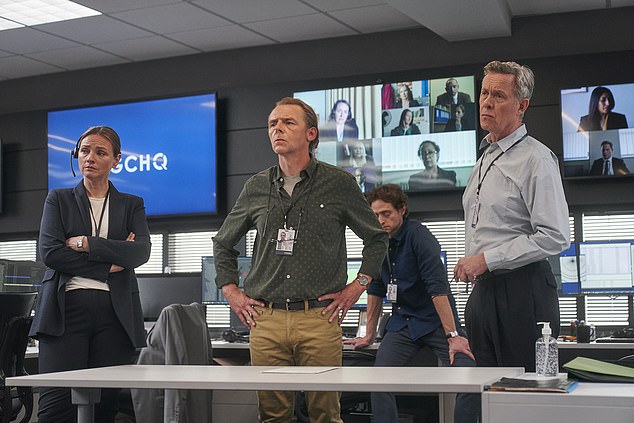 He added that director Kosminsky provides actors with ‘amazingly detailed character profiles’ which had Daniel down as a former rugby player – hence the unusual stress balls.

The Undeclared War starts on C4 at 9pm next Thursday.

Atkinson, 67, has made a comedy series, Man Vs Bee, for Netflix and his co-stars and executives have been lining up to talk about his ‘obsessive’ perfectionism and attention to detail.

Co-star Julian Rhind-Tutt observed: ‘He will try out tiny variants of the simplest gesture 15 or 20 times. He was charming, but absolutely ruthlessly professional – and brilliantly obsessed with the tiny details of making some- thing funny. ‘

Tom Basden, who plays a police officer in the show, which is released today, said Atkinson is quite different from Ricky Gervais, with whom he worked on After Life. 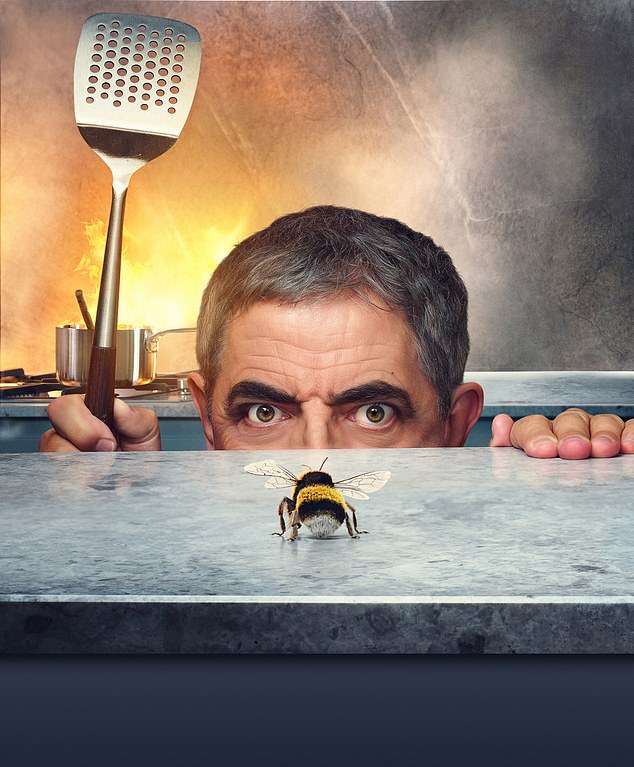 Atkinson, 67, has made a comedy series, Man Vs Bee, for Netflix and his co-stars and executives have been lining up to talk about his ‘obsessive’ perfectionism and attention to detail

‘Rowan likes to plan and really think it through, especially when it comes to the physicality of the performance,’ said Basden. ‘He’s the complete opposite to Ricky Gervais, who is much more in the moment and follows his instincts.’

In Man Vs Bee, which consists of nine short episodes of around ten minutes each, Atkinson plays a hapless house-sitter, Trevor Bingley, who is plagued by a bee.

Director Kerr commented: ‘The most special effect of all was Rowan Atkinson’s face.’

Speaking this week, Atkinson said: ‘I am a perfectionist, but I am a believer that it is as much of a curse as a good quality.

‘When filming, I am sure there is something better that we didn’t catch in the take. There is always something that you can’t capture. It’s sad, really. ‘

Does this make him like another famous perfectionist, Tom Cruise? ‘That may be the only thing we have in common,’ he said, seriously.

Becoming Elvis took months of work for Austin Butler, including exhaustive sessions with movement and vocal coaches before and during filming. However, his co-star Olivia DeJonge, a young Australian actress, seems to have had an easier time of it when portraying the King’s young bride, Priscilla, whom he met when she was 14. 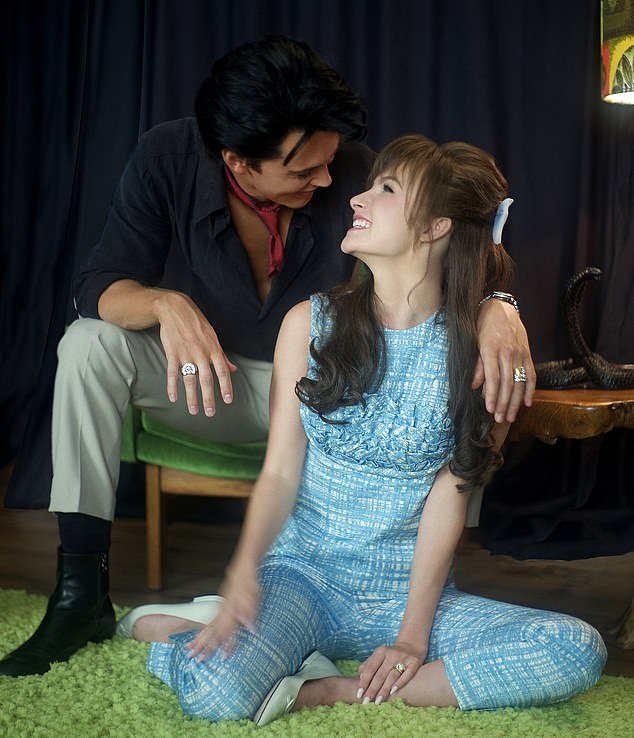 Becoming Elvis took months of work for Austin Butler, including exhaustive sessions with movement and vocal coaches before and during filming

‘All the costumes were made by Prada to perfectly fit my body.

‘Did I want to take them all home? Yes I did.

The film is in cinemas today.