Britain’s financial sector has taken Brexit ‘in its stride’, it was claimed last night, as figures showed that major UK banks generated more profit last year than their French counterparts for the first time since 2015.

That pipped France’s top banks, whose bottom line earnings added up to £45billion. Germany lagged even further behind at £11.4 billion.

Six years ago, Britain’s vote to leave the European Union prompted fears of a banking exodus – and led to continental financial centers, including Paris and Frankfurt, stepping up efforts to lure parts of the industry away from the City.

That appears not to have come to pass and although analysts cautioned that some one-off factors had flattered UK banks’ profits last year, the figures were seized upon as proving the fears wrong.

Conservative MP Anthony Browne, former head of the banking industry’s lobby group and a member of the Treasury select committee, said: ‘The City is the world’s leading financial center and has taken Brexit in its stride.

Predictions that Brexit would lead to the demise of the City have been proven wrong-headed.

‘Far from withering outside the EU, the City is showing remarkable vitality.’

The figures also showed that Britain’s banks delivered a better overall return-on-assets ratio – a measure of profitability – than the European average.

HSBC remains the only European bank in the global top ten for the 11th year running – in ninth position.

The rest of the top ten, measured by core equity assets, is made up of Chinese and US lenders.

The figures also showed that after taking a profitability hit in 2020, the UK banking sector had rebounded with a 200 percent increase in pre-tax profits last year.

Much of the boost, however, came as lenders were able to claw back billions that had been set aside early in the pandemic when it was feared lockdowns could create mass unemployment and a property slump.

Those provisions had put a dampener on profits in 2020. 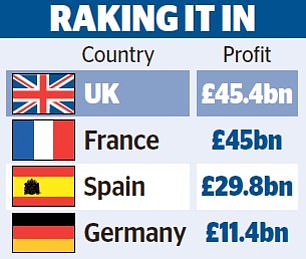 But after the government stepped in with furlough support, the banks’ worst fears did not happen and they were able to take back those sums, flattering earnings the following year.

France has been trying to lure London’s bankers with ploys reportedly including language lessons for them and their families.

A ‘Choose France’ effort by President Emmanuel Macron, rolling out the red carpet to global investment banks, has enjoyed partial success with JP Morgan, Goldman Sachs, Morgan Stanley and Bank of America stepping up their presence in Paris over recent years. But it has not always gone smoothly.

Last year, it was reported that when JP Morgan asked 15 traders to move to Paris, almost half chose to quit instead.

Figures published earlier this year by auditor EY showed that the number of Brexit-related staff relocations to the EU stood at 7,000, described as ‘significantly down’ on the peak of 12,500 estimated in 2016 when ‘Project Fear’ was in full swing.

Gary Greenwood, analyst at Shore Capital, said UK banks were in a ‘lot better shape’ than they had been when the financial crisis struck – holding more capital to guard against future shocks and held back by tighter regulation from embarking on the riskiest lending behavior .

One source of post-Brexit friction has been the use of London for clearing trillions of euros worth of derivatives transactions.

In January, the EU extended permission for banks to use the City for clearing until 2025 while stepping up efforts to end ‘over reliance’ on Britain for the service. Susannah Streeter at Hargreaves Lansdown said that there were concerns in the sector.

Lenders in Europe, meanwhile, have been weighed down by separate issues, such as the exposure of France’s BNP Paribas to sanctions-hit Russia.

And the European Central Bank has been ‘behind the curve’ in raising interest rates, already rising in Britain and the US, Streeter said.

Russ Mould, investment director at AJ Bell, said: ‘There does not appear to have been a mass movement of staff, resources, trade flows or fees overseas, at least as much as Paris or Amsterdam or Dublin or Frankfurt would have hoped for in the wake of the Brexit vote.’