Verdict: A remarkable life, all shook up

Which music biopic is your No 1, top of your own hit parade? There have been loads over the past 20 years, telling the life stories of Elton John, Freddie Mercury, John Lennon, Johnny Cash, Ray Charles, Aretha Franklin and David Bowie, among others.

So it was only a matter of time before Elvis Presley joined the party. After all, he’s the most dazzling superstar of the lot, measured in rhinestones alone. Director Baz Luhrmann must have thought: it’s now or never. If he didn’t do it, someone else would.

On the whole, I’m glad it’s him. If, like me, you much preferred the playful Elton John biopic Rocketman (2019) to the more conventionally-told story of Freddie Mercury and Queen, Bohemian Rhapsody (2018), then you might appreciate Luhrmann’s flourishes. . . the tricksy editing, the split screens, the slow-mo, the animated sequences.

It’s not as much of a trip as Luhrmann’s 2001 picture Moulin Rouge !, but it’s never less than stimulating to look at, a spectacle as much as a story. Elvis’s life, all shook up.

It is rare to find Hanks playing a character practically without virtue, so it perhaps helps that he is prosthetised almost beyond recognition beneath a fat suit, sporting acres of wobbly jowls and an elongated nose, like a corpulent version of the sinister Child Catcher from Chitty Chitty Bang Bang. In short, Hanks really does appear to have left the building.

Those unaware that Colonel Tom was actually born Andreas van Kuijk in the Netherlands will be bewildered by his curious accent, because Parker’s background, and his illegal arrival in the US, is referred to only obliquely. 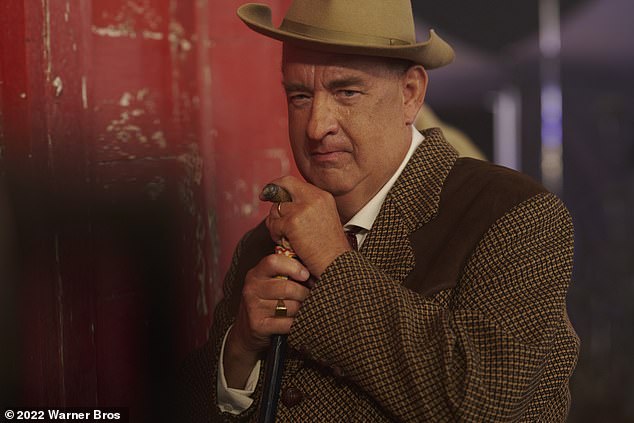 It is rare to find Hanks playing a character practically without virtue, so it perhaps helps that he is prosthetised almost beyond recognition beneath a fat suit, sporting acres of wobbly jowls and an elongated nose

But then he also acts as the film’s narrator, and why would he emphasise his own foreignness? Instead, he tells us snippily at the start that ‘there are some who make me out to be the villain of this here story’. It’s entirely untrue, he adds, that his unrelenting demands helped to finish off his famous protege, who died in 1977 aged only 42. ‘I didn’t kill him,’ he says. ‘I made Elvis Presley.’

Luhrmann is not known for his film-making brevity, so over more than two and a half hours we get to draw our own conclusions. And in fairness, Parker comes across as a brilliant entrepreneur with a gimlet eye for the main chance.

But the film’s message is really that nobody except Elvis made Elvis, much as he wallows in the influences of black artists such as Big Mama Thornton (Shonka Dukureh), Little Richard (Alton Mason) and BB King (Kelvin Harrison Jr). Usefully, even if he looks rather more like the young John Travolta than the young Elvis Presley, Butler gives a genuine virtuoso performance that is far more than an impersonation.

I saw it first at last month’s Cannes Film Festival, where it received the stamp of approval from Riley Keough, who was there as a director in her own right, but also happens to be Elvis’s granddaughter.

As she and the rest of us are well aware, there are a thousand nightclub Elvises who can reproduce the famous lip curl. Sensibly, Butler doesn’t attempt it, swerving away from caricature. But he has the voice and the moves, and nails the picture’s best scene, when Elvis gives his first live performance, in 1954, and the girls in the audience begin to swoon. ‘It vos,’ recalls the former fairground huckster Colonel Tom, ‘the greatest carnival attraction I’d ever seen.’

Elvis’s effect on them was like that of a charismatic young evangelical preacher, and Luhrmann gives us a glimpse into another of his influences, flashing back to 1947 to show us a wide-eyed kid, in the Mississippi boondocks, watching a religious revivalist meeting.

Yet the film’s main focus is the period between the great man’s rise to fame and his sad demise; from those early recordings at Sun Studio in Memphis and moving his beloved mother and family into the nearby Graceland mansion (scenes with conspicuous echoes of The Beverly Hillbillies), to making movies, joining the army, meeting Priscilla (Olivia DeJonge), and the final , overweight, unhappy Vegas years.

Many of us know the story already, but this offers a lively reminder.

‘A modern-day Elvis,’ says Liam Gallagher of the star of George Michael: Freedom Uncut, but he means in life, not in death. This is the autobiographical documentary the singer was working on just before he died, and he pulled in lots of his celebrity pals to make fawning observations. The irony, of course, is that his sad death, aged just 53, made Gallagher’s questionable Elvis comparison more valid.

George Michael devotees will relish this film but there’s not much to excite the rest of us. Yes, there are some great clips from the heyday of Wham !, and he shares a few candid thoughts about fame, grief and depression, but really this is a vanity exercise rendered more poignant by his death on Christmas Day 2016, but not any more interesting.

As for those celebrities, do we really need to hear what James Corden and Ricky Gervais think of their pal George? Mind you, there’s a memorable line from Naomi Campbell, who owns up to being more of a Culture Club fan. ‘We used to throw eggs at the Wham! fans, ‘she admits. 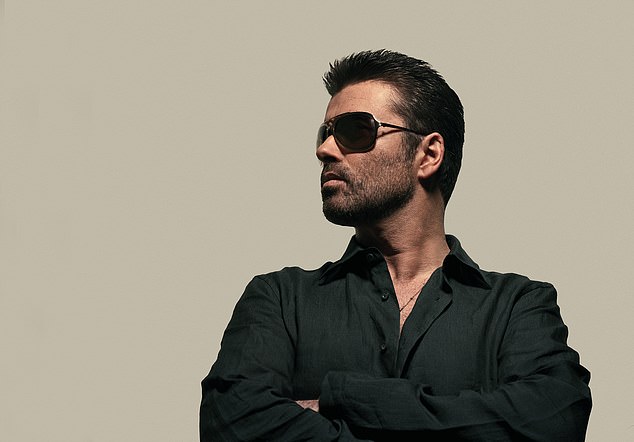 Considering the Mediterranean weather outside, there was a surprisingly big crowd at the Odeon Hereford’s 6.30pm showing of The Black Phone (15, 102 mins) on Wednesday.

They were rewarded with some proper jump-scares, but a film that lurches a little uncertainly from a dark abducted-children thriller into supernatural horror.

It is based on a short story by American writer Joe Hill, who knows a thing or two about the transition of creepy stories from page to screen; his father is the mighty Stephen King. 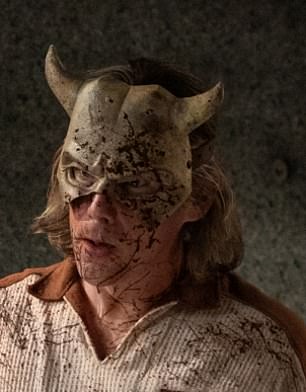 Gwen believes she has psychic powers, which she needs when Finney is abducted, too; by a mask-wearing weirdo known as The Grabber, and played, somewhat against type, by Ethan Hawke

Set in suburban Colorado in 1978, the film focuses on a brother and sister, Finney (Mason Thames) and Gwen (Madeleine McGraw), several of whose schoolmates have gone missing. Gwen believes she has psychic powers, which she needs when Finney is abducted, too; by a mask-wearing weirdo known as The Grabber, and played, somewhat against type, by Ethan Hawke.

Imprisoned in a basement, Finney then starts communicating, via the eponymous black phone, with his abductor’s previous victims, who give him tips on what and what not to do in the bid to escape.

The director is Scott Derrickson, a horror veteran, though his most mainstream movie is the huge 2016 Marvel hit Doctor Strange. He keeps this bowling along quite watchably (apart from the bit when the young woman in front of me buried her face in her boyfriend’s arm) and has the good sense to keep it fairly succinct.