A second British passenger has told how he and five colleagues from the Williams Formula 1 Racing team were ordered off an Air Canada flight by armed police for ‘no apparent reason’.

Jordan Conlan, 28, and his workmates including a pregnant woman were ejected just before the Heathrow-bound plane left Montreal after last weekend’s Grand Prix in the city.

MailOnline revealed yesterday how at least 25 passengers were thrown off without being given any proper explanation.

They were later told in the terminal that they may have been either drunk or not obeying mask-wearing rules, although all of them insisted they had done nothing wrong.

Air Canada has admitted it is investigating ‘allegations’ that some of the passengers were thrown off the plane in error as it sat on the tarmac before taking off.

The airline has refused to answer further questions from MailOnline and has apparently not contacted any of the passengers to tell them why they were targeted. 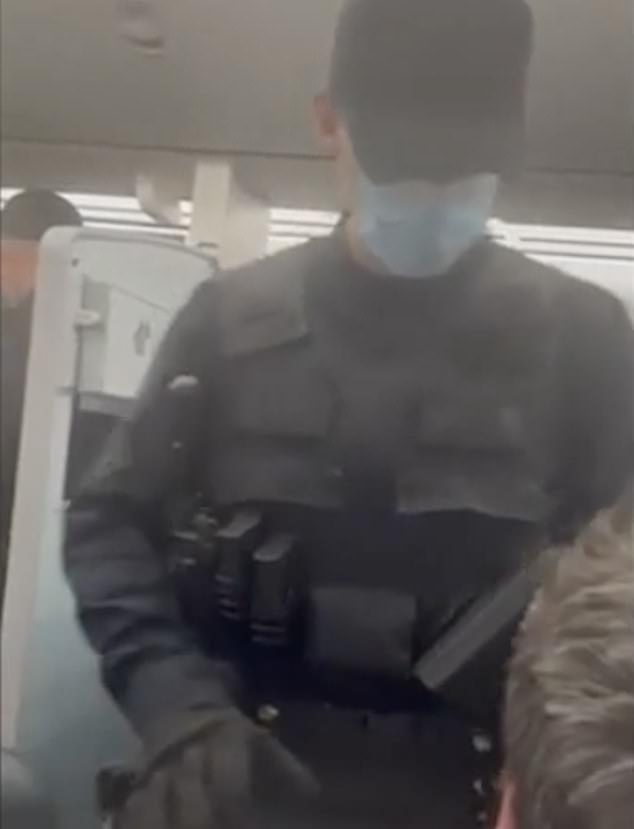 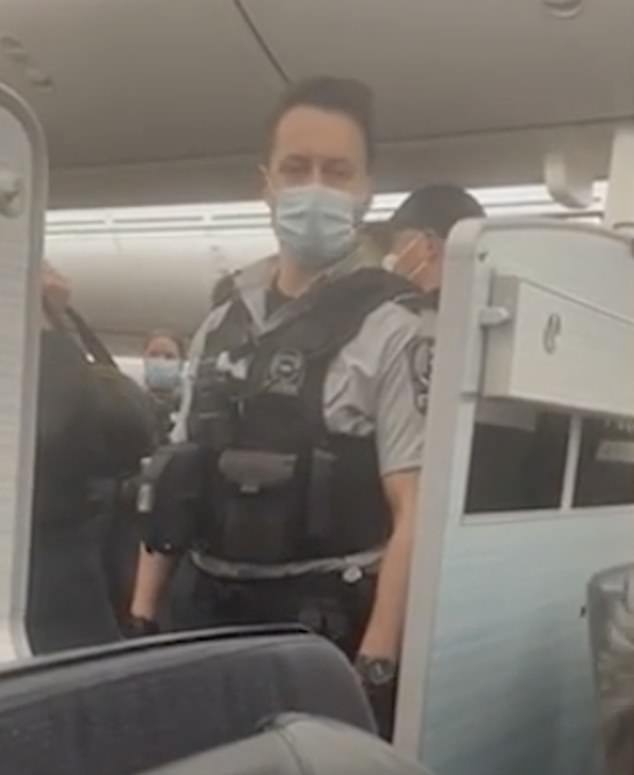 Jordan Conlan, 28, and his workmates including a pregnant woman were ejected just before the Heathrow-bound plane left Montreal after last weekend’s Grand Prix in the city 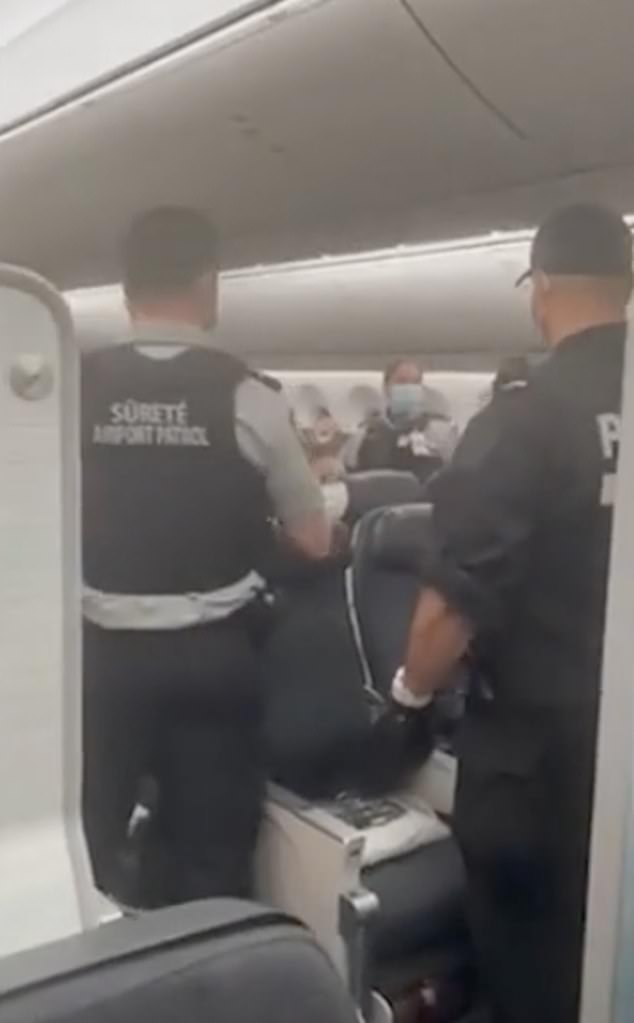 Jordan who works for a company installing garage walling for the Williams team said he believed around 30 passengers were ordered off the plane on Monday night.

Have YOU got a story for MailOnline?

** Have you got a story for MailOnline? Email [email protected]**

In an exclusive interview with MailOnline, he said: ‘Everyone on the plane was behaving properly and it was very quiet.

‘People were as quiet as anything and going to sleep as they waited to get underway. There was no rowdy behavior and everyone seemed to be wearing masks.

‘We had been sitting on the runway for an hour when a member of security staff from the airport who was in a stab vest began walking up and down the plane.

‘There was nothing going on whatsoever. Then all of a sudden a long line of five or seven police officers came on the flight.

‘They were with a bald guy who had been checking tickets and passports as people got on board. He had a piece of paper with a list of seat numbers of people who were being thrown off. ‘

Jordan said the first person ordered off was a Williams team member in Business Class who had his leg in a brace after breaking his ankle in Canada.

Then the police threw off a pregnant member of the Williams team and another woman colleague, sitting near him in the economy.

Jordan said the mystified pair ‘were completely fast asleep’ when they got tapped on their shoulders by armed police and told to leave.

‘They were both crying and very upset. They just could not understand it.

‘The bald guy was just going along, saying “This person, this person” and saying they had to get off. Then it was my turn to be ordered off. I asked why, but he would not tell me.

‘I previously had my head phones on with my shoes off and my mask on, and I was falling asleep with my eyes closed. 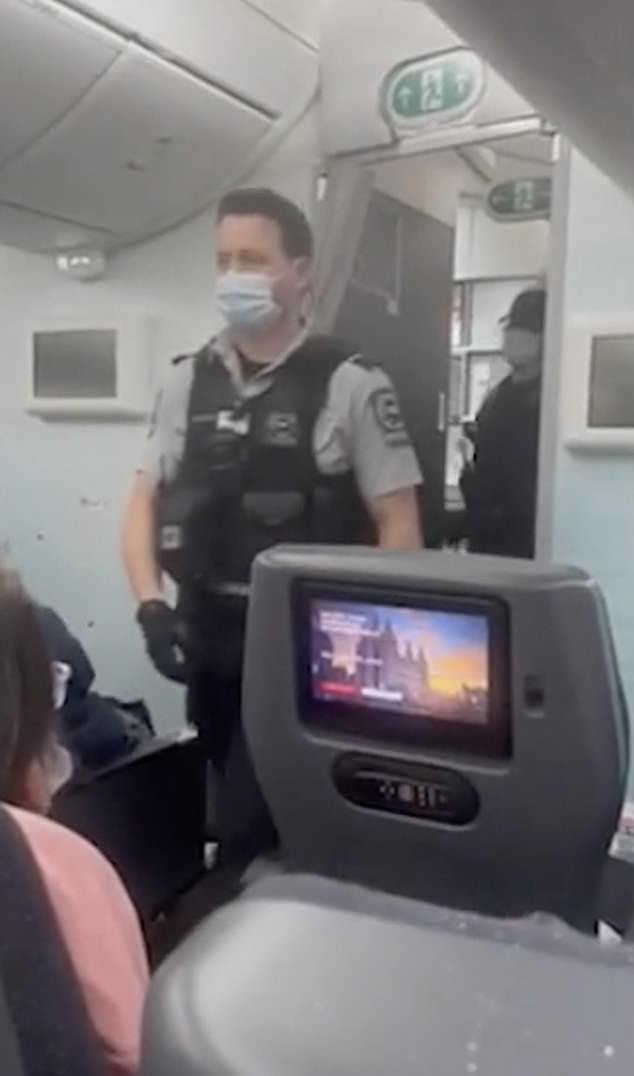 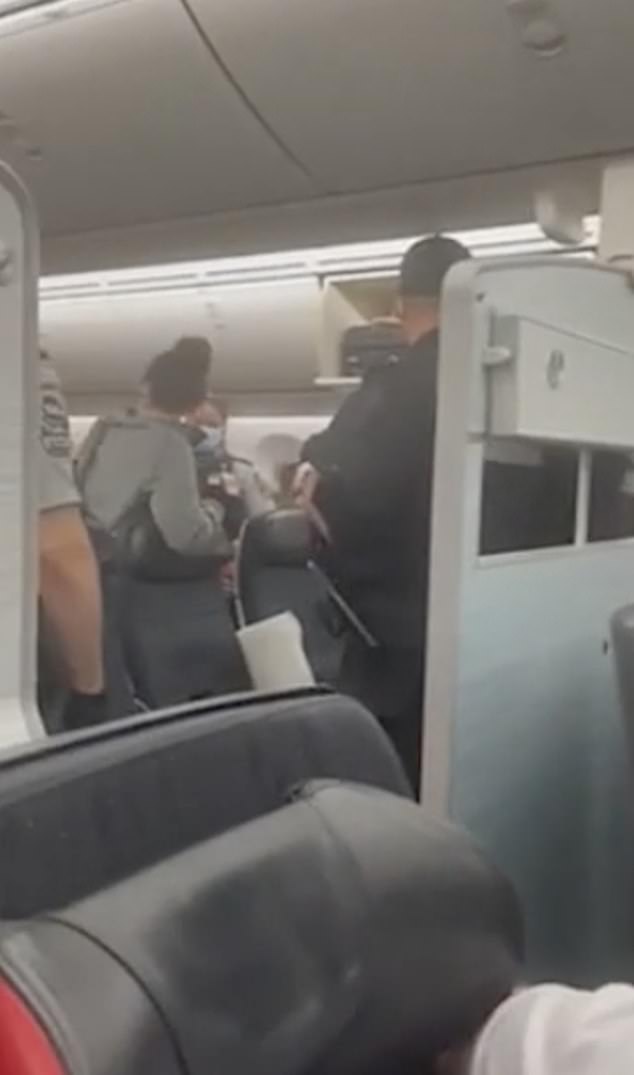 Jordan said the first person ordered off was a Williams team member in Business Class who had his leg in a brace after breaking his ankle in Canada. Then the police threw off a pregnant member of the Williams team and another woman colleague, sitting near him in the economy

‘I had been for a meal with a colleague about two hours ago, and we had just one beer each. He stayed on the flight, and I got taken off. It was scary stuff. It was a bizarre situation.

‘I was with the Williams team, so I was obviously expected to behave properly. The last thing I would have been doing was getting drunk.

‘Two Canadian residents next to me were also taken off. The guy had a full face mask and an eye mask, and was fast asleep.

‘They were not telling us where we were going and just said we needed to get off.

‘The gantry walkway back to the terminal was lined with armed police officers on both sides and we had to walk between them.’

Jordan said that four members of the Aston Martin F1 team were also targeted as well as a member of the Red Bull team who was not allowed to collect his bag containing his passport, wallet or phone from the overhead locker.

He added: ‘They just said to follow the police to Customs and there would be people waiting for us. Some of us tried to head back to the plane and we got told off.

‘We were told we had to go back through Customs to enter Canada. I was worried about doing it, but in the end everyone went through.

‘We landed up in the baggage hall where we spoke to a female representative from Air Canada. She was not saying exactly why we got ordered off.

‘She just said that the police had grounds to take us off because we were not following mask rules, were drunk or aggressive.

‘She did not specify who had done what, but we were all under that remit.

‘We were waiting for our luggage to come off the plane, and she was blaming Customs for not taking our bags off.

‘The Customs guys were shouting back at her that it was not their fault. In the end, the plane left with our bags still on board.

‘I was arguing that it was a horrendous breach of aviation laws because travelers have to be flying on planes carrying their luggage. 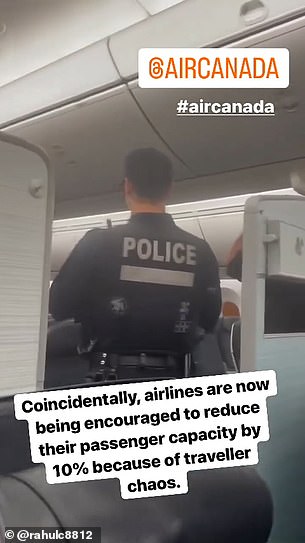 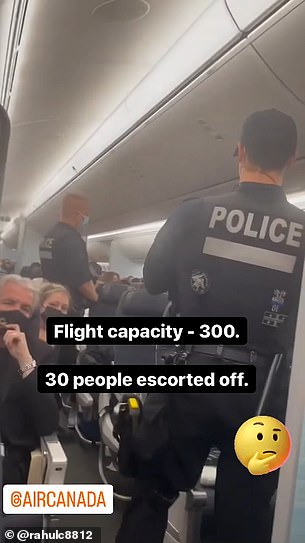 British couple Richard Brailey, 71, and wife Patricia, 66, had their dream holiday in Canada ended in a ‘nightmare’ when they were ordered off their plane by armed police with no explanation. Pictured is the police escorting them off

‘The Air Canada lady told us that all Air Canada would not be giving us new flights because of our behavior. Nobody could understand it because we had done nothing wrong. ‘

Jordan who lives in Warwickshire said he had been left wondering whether a ‘grumpy’ air stewardess on the flight was anything to do with the decision to eject passengers.

He said: ‘She was quite rude to two of my colleagues and said, “Can you sit down please?” when they were putting bags in overhead lockers.

‘I just wonder whether she had a bad day and wanted to get revenge.’

Jordan said he and his colleagues were put up in a downtown hotel in Montreal for the night and were booked by Williams representatives on a British Airways flight back to Heathrow on Tuesday night.

MailOnline told yesterday how retired surveyor Richard Brailey, 71, and his wife Patricia, 66, from Hertfordshire were left baffled after they were ordered off the flight on their way home from a four week camper van holiday around Canada. 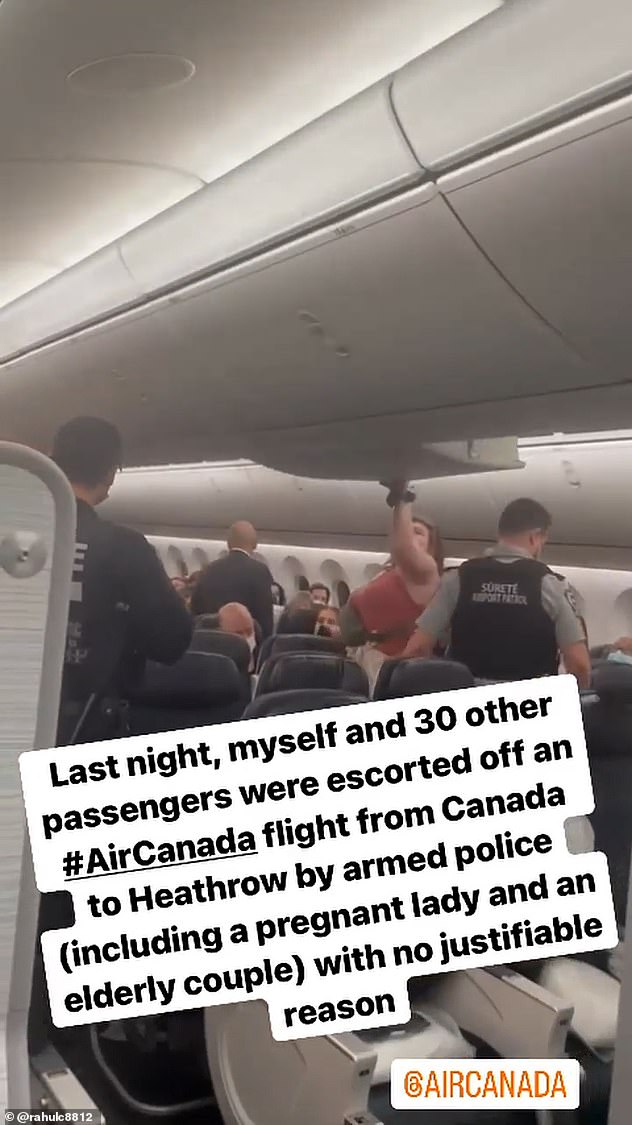 Father-of-three Mr Brailey said he was still feeling ‘shocked and disgusted’ after they were ejected from the flight, despite having done nothing wrong. Amongst those escorted off included a pregnant woman, it is reported

The couple were given no reason for their ejection, but were later told by airline staff in the terminal that they may have been thrown off for being drunk or not wearing masks.

They were left mystified because they had not been drinking and had been wearing masks constantly in their seats as they waited for the plane to take off.

Mr Brailey insisted that he had not seen any other passengers misbehaving or failing to follow instructions from cabin staff on the plane.

He and his wife were forced to spend the night in the airport as they could not find a room in a hotel, and were eventually given Air Canada flights back to Heathrow via New York on Tuesday.

The couple from Hertfordshire were initially told that Air Canada was not responsible for them and that they could not get on another of the airline’s flights for at least 24 hours.

One of their sons spent £ 1,300 on booking an alternative flight home for them on another airline before Air Canada came up with the new flights.

The coupe are now demanding compensation for their ordeal and for the money that their son spent on new tickets which could not be refunded. 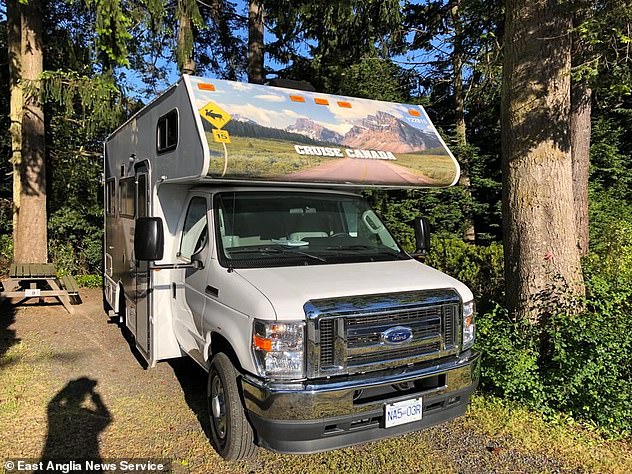 Mr Brailey said he and his wife would now be demanding compensation for their ordeal and the money spent on the alternative flights which could not be refunded. Pictured is their camper van which they enjoyed before their dream Canada holiday ended in a nightmare

An Air Canada statement said: ‘We are currently investigating the circumstances surrounding this incident involving a group of 25 customers who were removed from our flight from Montreal to London Monday night, due to disruptive behavior.

‘We understand that there are allegations that in the course of removing these passengers, certain unrelated individuals were deplaned as well.

‘Some of these deplaned customers were rebooked this morning and are on their way to their final destination. Once our investigation is completed, we will follow up with the customers. ‘

** Have you got a story for MailOnline? Email [email protected]**